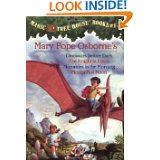 Two weeks ago, I read The Magic Tree House: Dinosaurs Before Dark to ED.  This inspired a short themed unit on dinosaurs. Here are a few of the things we did, plus other dinosaur books and dinosaur puzzles that I don't have pictured below.

Last week we were lucky enough to top our theme-time unit off with a visit to the Gray Fossil Site in east Tennessee on our trek to visit Auntie C, Uncle T and the cousins for Thanksgiving at their farm. 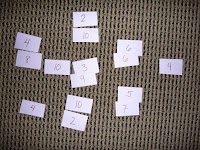 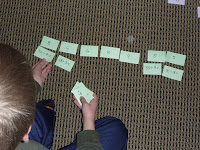 Posted by The Homeschool Den at 6:05 AM 3 comments: 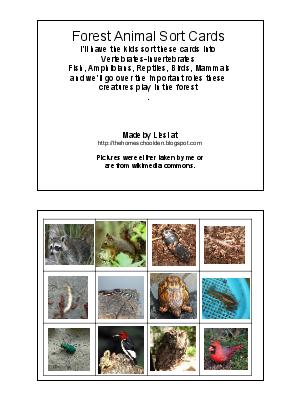 ED's next habitat study is on the forest. I made a set of cards for the kids to sort through. We'll be sorting them by
vertebrates-invertebrates
and also into the five animal kingdoms:
( fish), amphibians, reptiles, birds and mammals.

Since we live in the woods I used a lot of the photos I've taken in the past year or so and supplemented them with some from wikimedia commons.

Oh and by the way, I didn't include any fish in this sort--I did include a photo of crayfish that LD found in the creek that runs through the woods behind our house. They are crustaceans (related to the lobster) and would obviously be sorted into the invertebrate group.

If you would like a copy of the Forest Animal Sort Cards that I made, just click here.

P.S. I realized when I sorted these with the kids today that I didn't have the three frog and toad pictures I had intended to include. I added those in this afternoon and there is now a new file link above.
Posted by The Homeschool Den at 6:13 AM No comments: 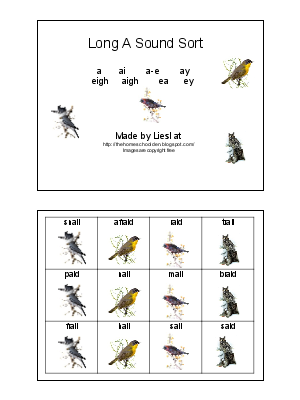 LD has gone over a lot of the different long-A sound word groups for spelling. I made this word sort to help cement in some of those families especially the trickier ones such as
eigh -- weigh, eight, neighbor, sleigh
aigh -- straight
ea -- steak, break

You can download a copy here if you are interested.
Posted by The Homeschool Den at 6:32 AM No comments: 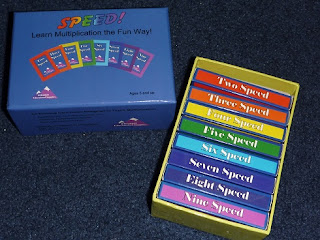 We had the privilege of reviewing a math card game called Speed!  Oh boy is it fantastic! I would have to give it 5 stars for sure.

I always try to include as many hands-on activities as possible in our homeschooling.  DD still has a lot of math games, but I've been less creative with LD lately as he is working hard on reinforcing his basic multiplication and division skills. Since the first day this game arrived, we've been playing 3-5 rounds of the game each day. It's a great way to learn your multiplication tables and to reinforce skip counting patterns. I highly recommend it!! 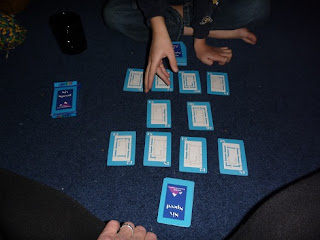 Let me describe it for you. You choose a deck to play.  LD and I chose 6-speed for this round.  First you divide the deck evenly among the players. Then you lay four cards out in front of you.  When everyone is ready, you turn one card over in the middle to play from. 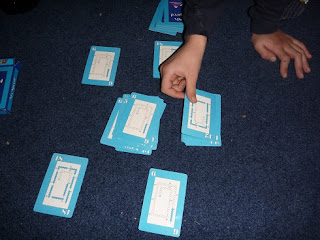 Each time you use one of your four face-up cards, you can replace it with a card from the stack of cards in your hand. The object is to be the first person to lay down all your cards.

In the picture to the left you can see LD is placing a card in the middle. He'll need to quickly place 2 more cards face up (for a total of 4) to play from in front of him.  I also have just 2 cards down in the picture and need to place two more face up since there are always supposed to be four in front of you (until your hand is empty).


If at any time the two cards in the middle are the same, you try to be the first to holler out "Speed!" and the other player has to pick up all the cards, shuffle them and place them back in his/her hand. 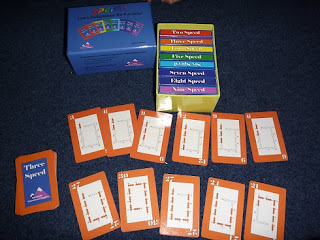 This is an exciting, quick game.  LD loves it.  I mean truly LOVES it! He is competitive, but to be honest I don't give him an inch... I love it too!  And the reinforcement he has gotten on the skip-counting patterns is wonderful.  I can see improvement on the speed with which he does his multiplication work.

I really like that each deck is its own color.  It ensures that clean up is easy if a card is misplaced. 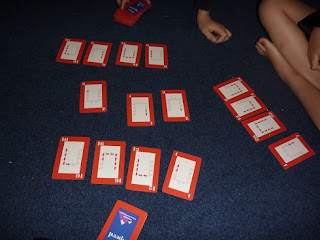 Since DD also wants to be a part of the action we have played a three person version of 2 speed. That worked well too, though the game went on longer since we all kept getting caught by the Speed! trap.  We made a rule that you could choose who had to take all the cards if you were the one who hollered out "Speed!" first.

Now if you've gotten to the end of this post--thanks for reading.  I think so highly of this game that I'd like to send one person their own set... just me passing on the kindness that Julie (the creator/homeschooling Mom) did for me. Just leave me a comment below (no later than midnight, Nov. 30th eastern standard time, USA) and the age of the kid/s who you'll be playing with.   I'll do a drawing (probably out of hat or something, nothing fancy here) on December 1st and will let you know who the lucky winner is (be sure to check back then, you'll have 3 days to be in touch). Oh and if you live overseas, I'll even let you "enter" -- but I will probably need to have it shipped to me and then will send on, so it would take quite some time to arrive. So there's nothing fancy about this giveaway, I just want to be nice and pass along a fantastic game! And if you like the game when it arrives and if you have a blog, it'd be great if you could give it a shout out too. It is absolutely wonderful to make math so fun and to have the kids begging for more.

Disclaimer: I was sent this product to review, but all the opinions expressed here are my own. And no one asked me to give away a set, I just think it's a terrific game.

We have a bunch different free skip counting pages over at our new location (homeschoolden.com) 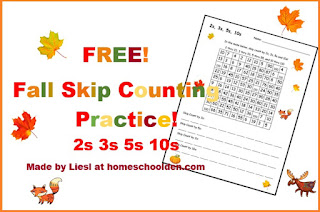 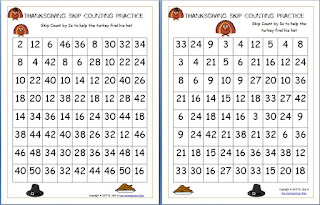 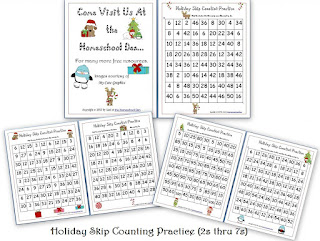 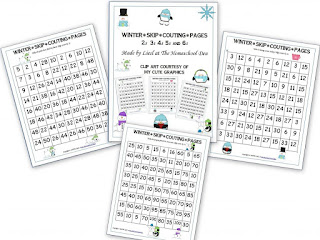 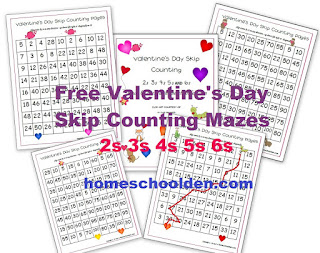 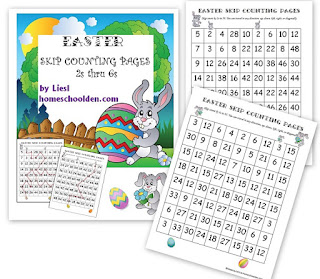 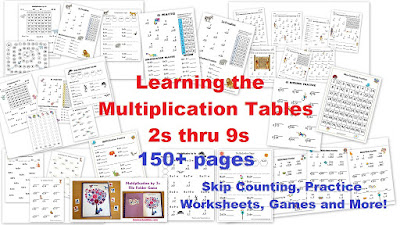 Each of the Multiplication Math Packets I made for ED had a different theme. And as you will see, the packets progressed from fairly easy, straight-forward pages in the first packet to mixed multiplication and division problems by the time she was working on her 8s.
What order did she learn her math facts?  2s, 5s, 10s, 3s, 6s and 7s (because those skip counting songs were easy for her!), 4s, 9s, 8s.

Many of these are  all on sale individually or you can buy the bundle of all these materials. ~Liesl

Blogs I Enjoy and Visit, Resources I Find Helpful

I finished replacing most of the links I lost and have my page up and running again with the Blogs I Enjoy and Visit, Resources I Find Helpful. If you're interested you can now visit that page again. I color coded it as follows:

Homeschool Blogs I Enjoy is the first section in pink.

Next is Useful Homeschool Resources in light blue with the following subsections:

The third section in green is teacher's blogs I enjoy (though something funky happened and it changed to a new font with strange spacing.
Pink section is used curriculum and saving money.

The yellow section are my favorite Montessori links.

The last blue section are the websites I find useful for teaching German to very young kids.

I came across a number of free Thanksgiving activity packs and thought I'd share those for anyone who might be interested in the next week or so: 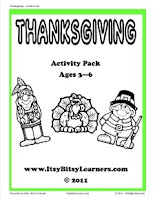 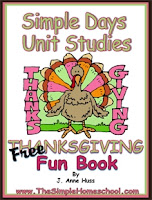 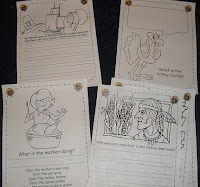 If you like this pack, you might want to pop over to The Simple Homeschool and register for their newsletter. From Dec. 1-12 they will be giving away 12 freebies and prizes. 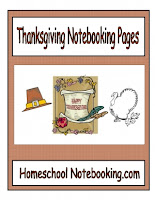 Over at 1+1+1 there is a Thanksgiving Preschool Pack to download for free.

Jolanthe over at Homeschool Creations also shares a Thanksgiving printable packs. One is geared towards preschoolers and the other for kindergartners. 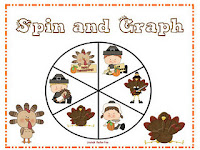 And for early elementary math:

Heather at Heather's First Grade Heart shared an adorable graphing activity for Thanksgiving called "Gobble Up a Graph." It is so cute! Thank you for sharing, Heather!

And over at Oceans of First Grade Fun there's a cute coin counting activity called Turkey Bucks--counting out 11 to 19 cents.

I printed out the turkey number matching made by Honey over at Sunflower Schoolhouse for ED. She also has a turkey clothes peg addition up to 6.

Thanksgiving Arts and Crafts:
Finally, for lots and lots of cute arts and crafts projects and ideas pop on over to the Crafty Crow -- a collection of crafts from bloggers all over the internet.We did a cute turkey craft (left) based on one of the ideas I saw there. 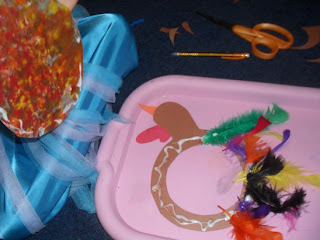 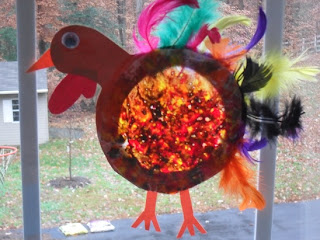 Posted by The Homeschool Den at 6:06 AM No comments: